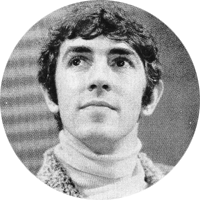 "Good Evening" is an unofficial/unapproved/no copyright infringement intended (and all that jazz) fan website dedicated to Peter Cook! Feel free to email me (Deanna!) with questions, concerns, suggestions, whatever!

I launched this site on December 27, 2005 and gave it the title "Good Evening" because it's a phrase that seemed to come up a lot in Cook's performances. (It's also the title of Cook and Moore's Grammy- and Tony-winning stage show from the early 1970s.) It has a nice ring to it, I think! The images in the gallery are screen captured/scanned by me, unless otherwise noted. All other original content here on the site is created by me, but I welcome any and all contributions!!

Why I Heart Peter Cook

So what in the world made some gal in a small US town want to set up a website about a British comedy legend? I first saw Peter Cook in the episode "The Foretelling" of The Black Adder years and years and years ago. Though that cameo was memorable, I still wasn't too hip to how awesome he was until I caught Bedazzled on PBS a few years after that - what an eye-opener! I considered myself enlightened and went about finding out more about him, which proved to be a very worthwhile thing to do. I'm a fan because whether I guffaw or ugly laugh or giggle or chuckle at Cook's work, those guffaws and ugly laughs and giggles and chuckles are ones of pure happiness at pure funniness. His comedy was effortless and remains the easiest thing ever to fall in love with and laugh at like a total idiot. No matter the sketch, movie, appearance, or even song, Cook sweeps ya up into whatever yarn he's spinning, and you can't stop (don't wanna stop) watching/listening/reading. Long story short: Peter Cook was a pretty funny dude, and I'm proud to call myself a fan.